Caffeine and Creatine: Do They Counteract?

When it comes to performance-enhancing substances, look no further than caffeine and creatine.

Over the years a handful of studies have surfaced to suggest that caffeine and creatine actually counteract each other.

Therefore, in this article, we will investigate a number of scientific studies to determine the effects of taking both substances simultaneously.

Caffeine is a natural substance that is used to stimulate the nervous system. Considering caffeine stimulates the brain, it is commonly referred to as a psychoactive drug.

As a result, caffeine can help to increase focus, concentration, and performance. It has also been found to reduce feelings of tiredness and fatigue.

It is thought that 80% of the world’s population uses caffeine every day (1). Caffeine is particularly popular with those who engage in regular physical training.

Caffeine is found most commonly in beverages such as soda, energy drinks, pre-workouts, coffee, and tea.

When caffeine is ingested, it is rapidly absorbed into the bloodstream from the gut. Studies suggest that the full effects of caffeine can be felt one hour after ingestion (1).

Once in the bloodstream, caffeine makes its way to the liver where it is broken down into several different compounds.

While these compounds impact a variety of body functions, the primary effect is experienced by the brain.

Adenosine is a neurotransmitter (or chemical messenger) that causes the brain to relax and promotes feelings of tiredness.

As the day progresses, levels of adenosine tend to gradually increase causing us to feel more tired.

Research on caffeine also suggests that it may lead to an increase in adrenaline. Increasing levels of this hormone can also cause a sharp increase in energy levels.

Furthermore, caffeine has also been linked with increasing the activity of two neurotransmitters known as dopamine and norepinephrine (3).

A combination of these two mechanisms can lead to further enhancement of cognitive functions and abilities. 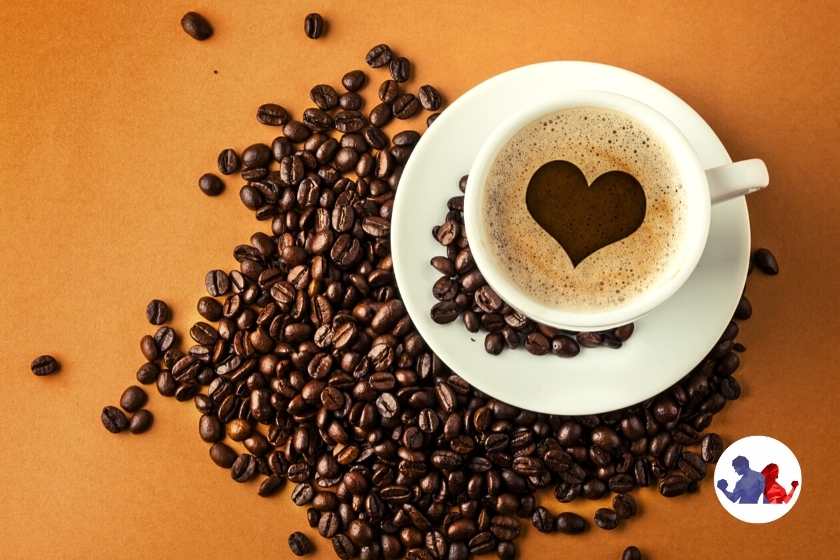 Creatine is a substance that can be found in the muscles of the body. The substance plays an important role in energy regeneration.

While the body produces the substance by itself, it is commonly taken supplementally.

Creatine is one of the most heavily studied substances in sport science. Research suggests that it can positively impact strength, size, power production, endurance, and athleticism (4).

By increasing phosphocreatine (stored creatine) levels, the muscles will be able to generate more Adenosine Triphosphate (or ATP) (5).

ATP is an organic compound that the body uses for energy to drive many processes including muscular contraction.

As a result of increasing phosphocreatine levels and ATP production, the muscles be capable of producing more powerful contractions.

This explains the improvements in athletic performance that are commonly seen in creatine users.

Research also suggests that creatine can also positively impact a number of cellular processes. As a result, it may also promote a greater, more efficient recovery from exercise (6).

Finally, creatine appears to be beneficial for cognitive function. The brain also stores a small amount of creatine and supplementation increases phosphocreatine stores in the brain.

Studies suggest that supplementation may enhance cognitive function and reduce the risk of neurological diseases (7).

Our team have picked up the best creatine supplements currently on the market to support your goals.
Find out more

Benefits Of Taking Caffeine and Creatine

As highlighted, many individuals take both caffeine and creatine in order to achieve particular goals. In this section, we will review the benefits of consuming both substances.

There is ample evidence to suggest that creatine and caffeine are both ergogenic aids (8). This term simply refers to any substance with performance-boosting properties.

Studies have consistently found creatine to enhance strength, muscle mass, power, and endurance. All of these improvements can primarily be attributed to an increase in energy (9).

While caffeine does not directly impact ATP, it does stimulate our nervous system causing us to feel more energized.

As with creatine, caffeine has been consistently found to improve a variety of performance markers (10).

Therefore, a combination of these two supplements can significantly increase energy and consequent performance.

In relation to the previous point, both substances have been found to reduce fatigue and tiredness.

As stated, caffeine does this by inhibiting the effects of adenosine. Meanwhile, creatine drastically increases energy regeneration thus nullifying fatigue and promoting endurance.

A study on cycling and caffeine consumption found that caffeine improves the time to exhaustion by 12% (11).

It is well-known that caffeine is a powerful substance that impacts our cognition.

Studies on caffeine have determined that it can positively impact cognitive performance, mood, and alertness, amongst others (13).

While caffeine’s impact on the brain is well-documented, creatine supplementation can also enhance cognition.

This is due to the fact that the brain uses ATP for energy. Considering that creatine supplementation increases the amount of ATP produced, brain function may improve.

One study on creatine and brain function found that supplementation improved short-term memory, processing, and intelligence (14).

Creatine and caffeine must be two of the most rigorously tested substances on the planet. Despite fears over the safety over the substances, studies have found both to be safe.

A review of caffeine determined that the substance was safe for healthy individuals. That said, for vulnerable populations, it may interfere with sleep and cardiovascular function (15).

Some believe that long-term use of creatine can lead to kidney damage. However, a long-term study on creatine determined no risk of kidney damage in healthy individuals (16).

Only for those who have existing or pre-existing kidney issues may creatine cause issues.

There are a vast number of other studies that have also found caffeine and creatine to be safe to consume. 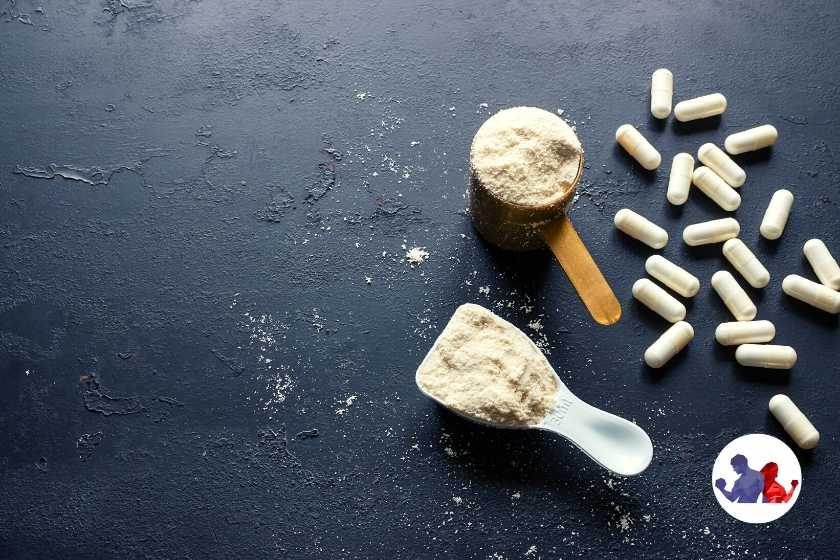 While it is clear that caffeine and creatine both have their benefits, taking both may cause a handful of adverse effects.

There is a wealth of material on the benefits of both caffeine and creatine individually. Unfortunately, there is less research on the impact of taking both simultaneously.

There is a study that suggests that caffeine may counteract the effects of creatine specifically in regards to force production (17).

Yet, there are many other studies that have not determined any negative interactions between the two substances (18).

In fact, the majority of studies on the matter recommended the use of caffeine and creatine to enhance athletic performance.

Some users of caffeine and creatine have reported digestive issues.

Caffeine appears to be primarily responsible for this as it stimulates the gastrointestinal tract and increases bowel movements.

However, a study reviewing caffeine and creatine consumption concluded that, out of fifty-four subjects, only four experienced digestive issues (19).

More research needs to be conducted to clarify the impact of both substances on digestion.

Caffeine causes more frequent urination which may contribute to dehydration. That said, a recent meta-analysis determined that moderate caffeine did not cause dehydration (20).

Taking creatine causes fluid to be retained as water is drawn into the muscles. This mechanism explains the bloating and weight gain that is experienced by creatine users.

As a result, many conclude that fluid retention negatively impacts hydration levels and causes muscle cramps. However, studies have found this understanding to be inaccurate (21).

Considering caffeine is a nervous system stimulant and increases alertness, it may interfere with our sleep.

Caffeine stays in our system for a relatively long period of time. Studies on the drug suggest that the effects of caffeine can be felt up to five hours after ingestion (22).

With this in mind, it is possible for caffeine to hinder sleep. However, providing caffeine is not taken close to bedtime, this can be avoided.

In regard to creatine, studies suggest that the substance might even facilitate sleep (23). That said, more research is needed.

In order to minimize the effects of some of these side effects, apply the following practices:

This is particularly important for those who exercise regularly and also drink a moderate or high amount of caffeine.

Drinking caffeinated drinks close to bedtime may interfere with sleep. Considering that the effects can be felt for up to five hours, avoid caffeine within five hours before going to bed.

While caffeine impacts individuals in different ways, consuming a high amount of caffeine is likely to increase side effects. Set an upper limit of 400mg of caffeine per day.

In relation to the previous point, switching to decaffeinated coffee is recommended. Decaf coffee contains approximately a tenth of the amount of caffeine. 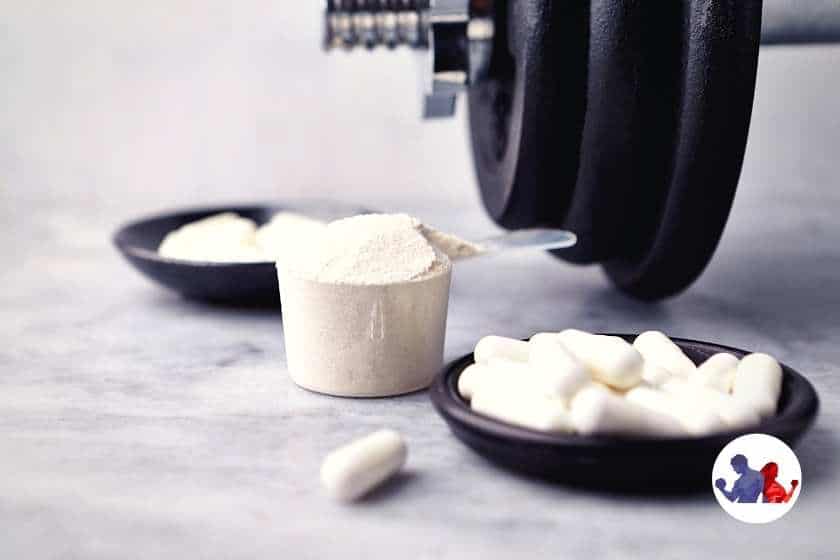 What do caffeine and creatine do to the body?

Caffeine is a psychoactive drug that stimulates the nervous system and leads to an increase in energy, alertness, and focus.

Creatine is a naturally occurring substance that increases energy in the muscle. Boosting creatine levels in the body can enhance strength, power, endurance, and athleticism.

While one study suggests caffeine may counteract creatine, the vast majority of studies have found no detrimental effects. Authors of these studies advocate the use of both substances.

How much caffeine and creatine should I take?

For caffeine, the recommendation is not to exceed 400mg of caffeine per day.

Things are a little more confusing with creatine as it requires a “loading” phase first. However, once this has been done, it is recommended to take a maximum of 10 grams.

Should I take caffeine and creatine every day?

For creatine, it may be necessary to take it every day to ensure that the levels of phosphocreatine remain elevated.

Are caffeine and creatine safe?

While taking caffeine regularly is safe, having a high dose of caffeine may cause a number of side effects.

There have been concerns in regards to the impact of creatine use on the kidneys. However, providing correct dosages are used, there is no risk of kidney damage (24).

What are the side effects of taking caffeine and creatine?

Some side effects often linked with creatine use include dehydration, nausea, weight gain, and muscle cramps. However, scientific evidence for many of these is lacking.

There is no denying that both caffeine and creatine can serve as ergogenic aids. There is plenty of research on the qualities of both substances.

There is a lack of research on the effects of taking both at the same time. That said, from the few studies that exist, it appears that caffeine and creatine do not counteract.

However, more research is required to confirm these findings.

Our team have picked up the best creatine supplements currently on the market to support your goals.
Find out more
References
Previous

How Can You Increase Testosterone Levels Naturally?

Welcome to Our Fitness Life

Our Fitness Life is an independent resource, dedicated to fitness lovers, gym goers, the health conscious, and those who want a good, healthier lifestyle. This is your nirvana (or samsara, depending on your take on life!)

Our Fitness Life is a participant in the Amazon Services LLC Associates Program, an affiliate advertising program designed to provide a means for sites to earn advertising fees by advertising and linking to Amazon.com.

All information provided on this site is intended for informational purposes only and does not constitute professional, medical or healthcare advice or diagnosis. The contents of these articles should therefore not be used as such.

Make sure to follow label instructions for whichever product you purchase. Always consult your doctor before using any products you see on this website.